Remember when Australia had a Minister for Science? Ah, good times, good times. Well, back in those dizzy halcyon days in the distant past (about a month ago) I wrote an angry little letter to Teresa Gambaro. It was just before the election and I was feeling angry and confused about the state of politics in general, but particularly in regards to Gambaro, owing to the fact that she was my local member, an unabashed racist and a chronic snail mail spammer. I emailed it, tweeted it and posted it right here on my little corner of the interwebs. And then this happened: 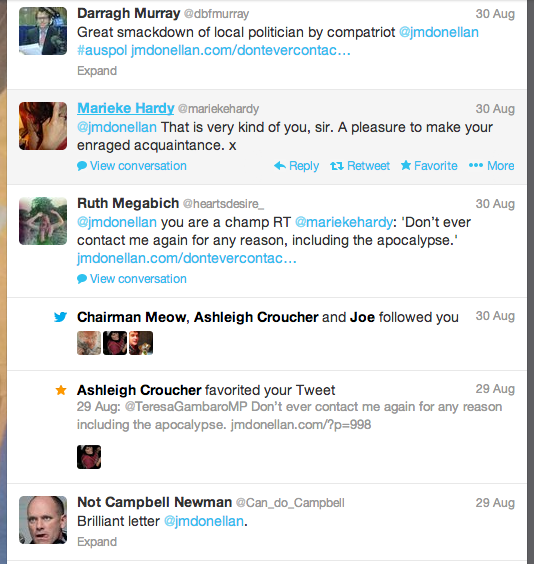 Over the next few days my little rant was shared, retweeted and ‘liked’ more than 10 000 times. I’d had a few posts get shared around before, like this complaint letter I wrote to QANTAS and this dating profile,  but never on this scale. Most amusingly, hundreds of people (including one of my literary heroes and chronic heartbreaker Marieke Hardy) retweeted my post directly at Gambaro. I had friends tell me they heard colleagues discussing it at work, overheard people talking about it in bars and, hilariously, it was printed and read out at the start of a local ALP volunteers meeting. The comments section quickly exploded into a rather chaotic clusterfuck of compliments and death threats, which I responded to here (scroll down to the bottom).

Having thousands of people tell you that you are witty and insightful over the course of a couple of days does very strange things to the ego. Imagine if one day 2 000 strangers came up to you in the street and said “Can I just tell you that you are really attractive?” It would be flattering to the point of being unnerving. 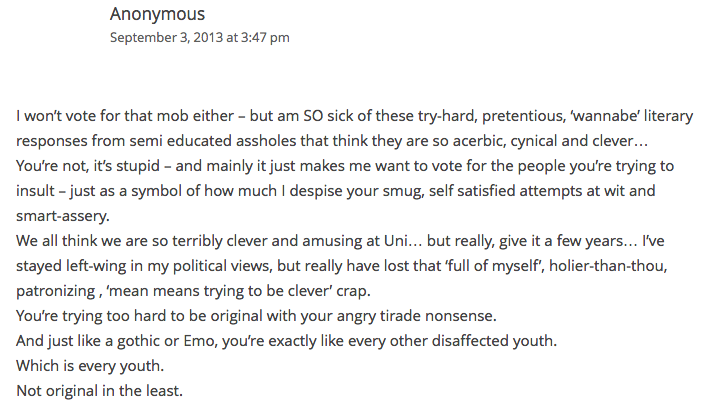 Vitriolic insults, unsurprisingly, have a profoundly converse affect. Imagine that in addition to those 2 000 compliments per day, you had around a dozen people approach you in the street, spit in your face and snarl “You make me sick and I hope you get hit by a bus and then the bus backs up over you just to be sure and then everyone on the bus gets out and shits all over your ugly, stupid carcass and then after you’re dead someone names a profoundly awful flesh eating disease after you and the disease in question immediately causes everyone you’ve ever loved to vomit blood until they die and they are all buried in a shallow grave that rabid dogs will gather round to ritually piss on!” Sure, you’ve just heard 2 000 compliments and you’re pretty buzzed about that, but damn, those dozen strangers REALLY HATE YOU. 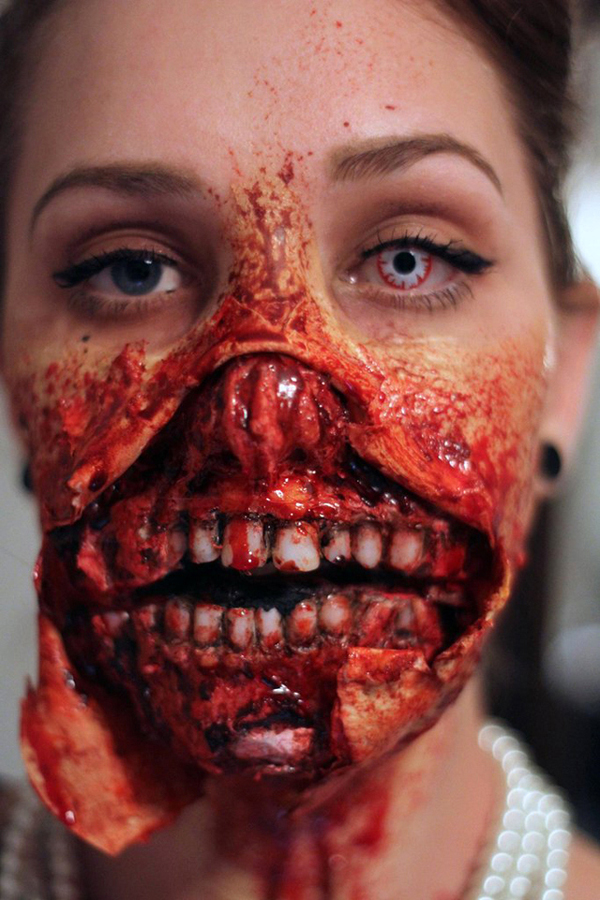 “Uh-oh, looks like someone’s got a case of the Donellans!”

It was something of an emotional rollercoaster, to say the very least. And while it was a rush to have something I’d made become so popular, I certainly don’t think that popularity alone is inherent proof of value or quality. Some of my favourite writers and poets have never cracked the best-seller list, meanwhile Billy Ray Cyrus sold millions of copies of Achy-Breaky Heart (and don’t even get me started on his daughter).

The strangest thing about the whole experience of living the Gen Y dream of going viral was reflecting on the fact that a 400 word rant that took me half an hour to write, edit and post has now been read by far more people than either of my novels. Those two books collectively represent five years of sweat, sleeplessness, agonising over commas and cuts, grinding my teeth over characters and subplots, stressing over cover designs and marketing approaches, dozens of meetings with publishers and editors and one vaguely related trip to the hospital. 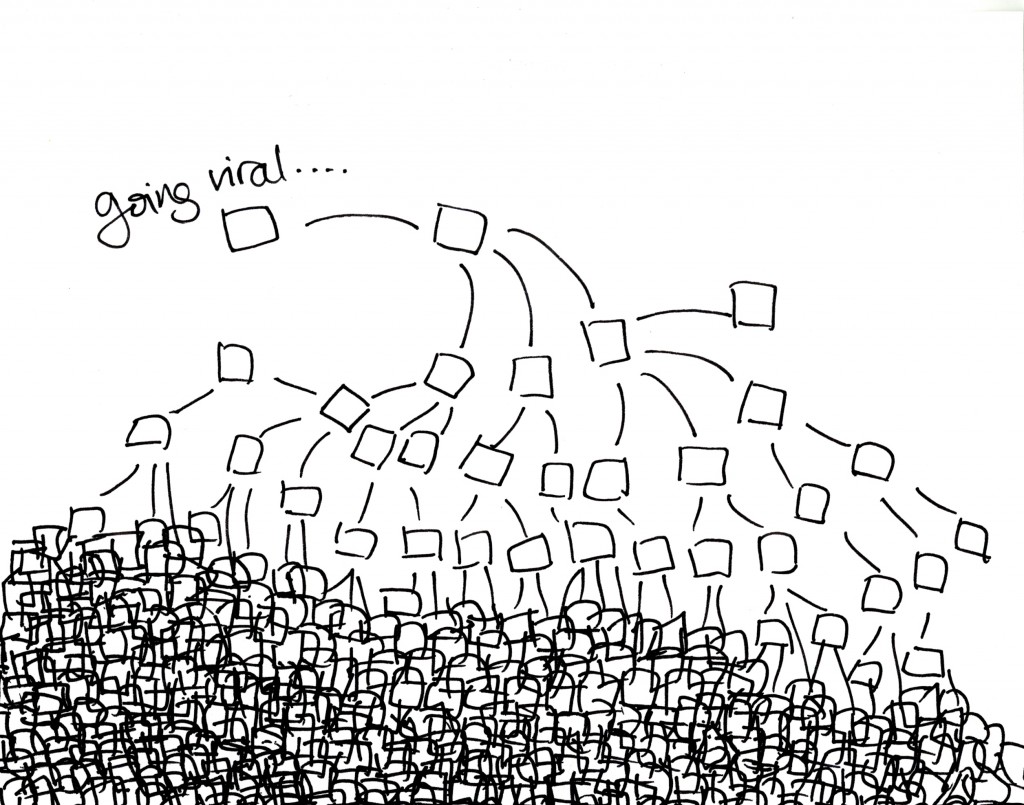 I’ve been working on my latest book, Killing Adonis, for 4 goddamn years now. That’s longer than I’ve ever kept a job or stayed in a relationship and longer than it took me to took get either of my degrees. I’ve written parts of it in Brisbane and Lisbon and Pnom Penh and Bogotá and Buenos Aires and New York. I’ve rewritten the ending five times. I’ve changed the title. I’ve added and removed characters and subplots. And at the end of all that, I have a roughly 85 000 word novel that will probably be read by about half as many people as my cantankerous little letter. Of course, the difference is that viral posts tend to buzz around the web like digital bees on blue meth for a couple of days and then die out, whereas books are absorbed more slowly, and are cherished and shared over a protracted period of time. So now I just have to hope and pray at least a few thousand people enjoy this collection of words that I have poured my heart, soul, brain, liver and appendix into, or at least hate it for all the right reasons.