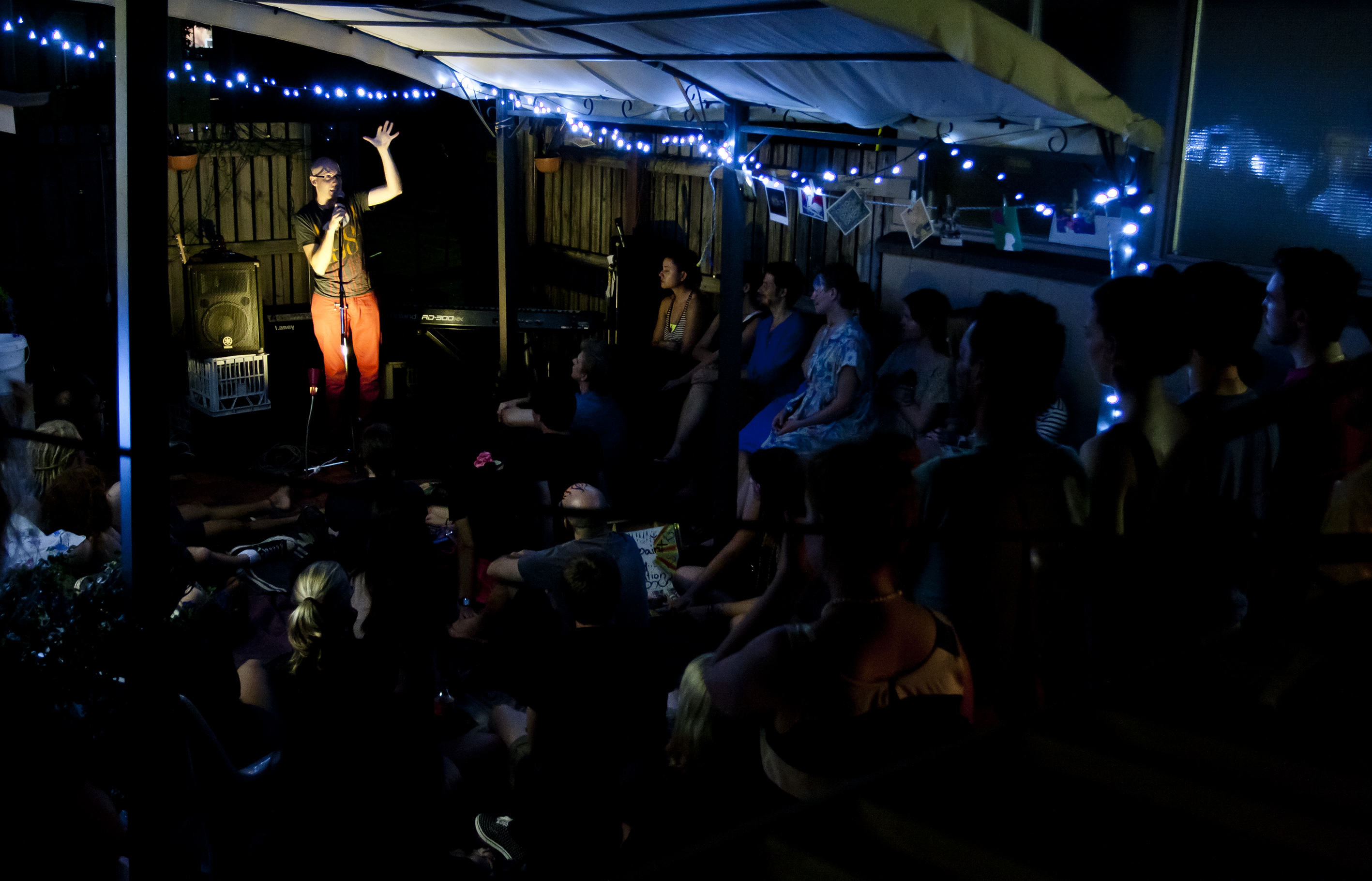 Just because I wasn’t poor enough from writing novels, I thought I’d try and find the art form that would result in the smallest amount of income humanly possible. This of course led me to to take up performance poetry.

Below you can find the EP I made with Mike Willmett (aka meeksounds), videos, and other shiny goodies.

A video of my poem Library, you can also download the full text here: LIBRARY

If you don’t know what the hell slam poetry is, here’s a brief interview I did with Scene magazine explaining it and other things. I can’t link to it because they use one of those weird and impractical online pdf reader things, but here’s a transcript. 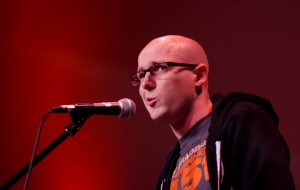 The Brisbane heat one winner of the Australian Poetry Slam… you slayed the opposition, right?

You know, the whole braggadocio thing isn’t really part of the poetry scene like it is in hip hop. You just do what you do and you hope that people like it and that you get dance on stage with a rubber chicken trophy. I just happened to be the dancing guy with the chicken at the end.

Your reaction; were you surprised by the win…

Actually, I was worried I was going to get on stage and puke. Not because of nerves but because I’d given blood a few hours before the comp and I think I didn’t eat enough afterwards. As I was sitting desperately waiting for my name to get called out I started going really pale and just kind of rocking back and forth and shaking uncontrollably. I must have looked like a junkie, which would probably fit with the slef-destructive poet cliché thing. Come to think of it, I did actually see a poet vomit on stage as part of their performance a few weeks ago. So I’m glad it didn’t happen because aside from the embarrassment, I would have looked like I was just aping his act.

For the uninformed, what is a poetry slam… and how does it differ from battle raps?

The main thing I get asked is ‘Is it improvised?’ which kind of puzzles me. When people say to me ‘I have a huge presentation with the board members in the morning’ or ‘I’m playing a gig at the zoo tomorrow night’ I don’t ask ‘cool are you just going to improvise?’ It’s generally meticulously crafted work that poets have slaved and sweated over, tweaking every last simile and synonym. Also it’s not just bragging about how you’re the bestestest and you eat other poets for breakfasteses, you’ll hear pieces about everything from politics to heartbreak to quantum physics. Also, aside from the hip hop influence a lot of slam poets draw heavily from the stand-up comedy scene. I’ve seen slam poets that have been as funny as Tim Minchin or Dylan Moran.

What initially attracted you to the world of poetry slams?

I’ve been playing in bands for years and years and I love performing, I get a huge rush every time my feet hit the stage. Unfortunately, the bands I start up or join just kept disintegrating, usually because someone gets a serious job or moves overseas or starts reproducing or whatever. So I was focussing more on writing novels, which I love but can sometimes get a bit hermetic. Performance poetry is the perfect marriage of live performance and writing.

Do you have a normal routine prior to a poetry slam?

Just yelling poems in my bedroom and keeping a notebook next to my bed. I’m an insomniac, I get some of my best ideas between ‘go the fuck to sleep’ and ‘oh my fucking god that’s my alarm do I really have to go to work now?’ o’clock

Preparation for the Queensland final… what sort of regiment are you currently undertaking?

Probably try and get my heart broken a few dozen times, drink a lot and listen to the Roots.

Brisbane’s poetry slam scene… is a it bubbling pool of creativity?

Yes, yes, yes and also yes. There are new poetry communities and events popping up all over the place. Doubting Thomas runs Words or Whatever, Darkwing Dubs runs the Jam Jar slam, Mandy Beaumont runs this whole town. I’m also a big fan of Betsy Turncot, who was runner up at the slam so she’ll be in the finals too which is great.

Drive-bys and poetry slams… they go hand-in-hand, right? No?

Yeah, of course. But it’s all verbal artillery. Sometimes I’ll just cruise by some sucka in my Ford Festiva and just blast ‘em with a few pugilistic similes likening their body odour to a deceased feline and their matriarchal progenitor’s monstrous girth to a northern European mountain range.

The next step for Josh Donellan…

Well, the finals in September obviously. Then ‘Zeb’ comes out sometime in the next few months. And I recently signed with Pantera Press for my new novel ‘Adonis Comma Coma’, that’ll be out next year. After that I think I might retire to a desert island. But it’ll be on a writer’s budget, so it’ll probably just be a raft made out of planks with a pot plant.