I was selected by my friend Rebecca Bloomer to be part of this blog chain called The Next Big Thing, where authors pick some of their friends and favourites to talk about upcoming works. Thanks to Rebecca for the nomination, I have in turn nominated Mandy Beaumont and Daniel Wynne.

1)   What is the working title of your next book?

2) Where did the idea come from for the book? 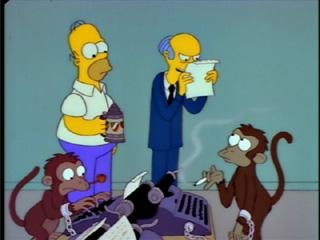 “It was the best of times, it was the BLURST of times?!? You stupid monkey!”

From my ideas factory, which is a facility I have in an underground bunker beneath an abandoned warehouse where I have a team of elves on laptops, monkeys on typewriters and vampires on tablets just pumping out ideas in exchange for biscuits and the odd human sacrifice. (Don’t worry, I just give them tinned Spam mixed with oil, the tears of exploited workers and ground up hundred dollar notes and tell them that it’s the corpse of Clive Palmer. They apparently can’t tell the difference.)

3) What genre does your book fall under?

4) What actors would you choose to play the part of your characters in a movie rendition?

Lauren Ambrose partially inspired the main character, Freya, so I’d get her for starters. Then I’d probably have to have a lot of long, candlelit meetings discussing the finer points of the script. I’d probably get James Franco to play Jack and then just reanimate the corpse of Ronald Reagan to play Harland Vincetti, because as well being an actor he was also the forefather of the economic ideology that Vincetti uses to incrementally ruin everything.

5) What is the one-sentence synopsis of your book?

6) Will your book be self-published or represented by an agency?

It’s signed to Pantera Press with an expected release date of September 2013. I had an agent but he wasn’t very useful so I ended up “donating” him to the ideas factory.

7) How long did it take you to write the first draft of the manuscript?

Roughly the amount of time it takes to watch all eight seasons of the acclaimed series ‘24′ a hundred times over.

8) What other books would you compare this story to within your genre?

I think Scarlett Thomas does similar things in that she discusses lots of strange and disparate concepts through her characters and uses a plot to hang all those ideas together. I’ve been told the manuscript also has a few parallels to Murakami’s work as well. I’m heavily influenced by Japanese writers who don’t over explain everything. I like to credit the audience with a little intelligence.

9) Who or what inspired you to write this book?

A character in an anime film I saw years ago had this monologue talking about how we are all really three people: The person we see ourself as, the person others see us as, and the person we believe others to perceive us to be. Being a fiction author, that concept of perceived reality vs fantasy vs objective reality fascinated me.

10) What else about the book might pique the reader’s interest?

Preliminary scientific research indicates that reading this or any of my other books alters the brain at a subatomic level allowing the reader to change the chemistry of their system at will. This alteration allows them abilities such as excreting pheromones that make them irrestible to their potential sexual partners as well as being capable of great feats of strength, super rad skateboard tricks and sweet guitar licks.